Both come with a dressing infused with cannabis oil, an ingredient touted for its miracle-like health qualities and appearing on restaurant menus more and more. (Like SA’s first cannabis pizza.) Why the rise in cannabis-infused food? Earlier this year, the Department of Health updated its regulations, making it legal to purchase the substance.

The Blowfish CANNAfornia roll has a filling of salmon and prawn, with cream cheese and a topping of avocado. The CANNAfornia poké bowl consists of sushi rice laced with a sweet chilli and caviar mayo with a hint of cannabis oil. It’s topped with salmon, edamame beans, pickled ginger, strawberries, cucumber and avocado.

All of that while you enjoy one of the most Instagram-worthy views in Cape Town.

CODFATHER RESTAURANT SERVES SOME OF THE BEST SEAFOOD IN TOWN 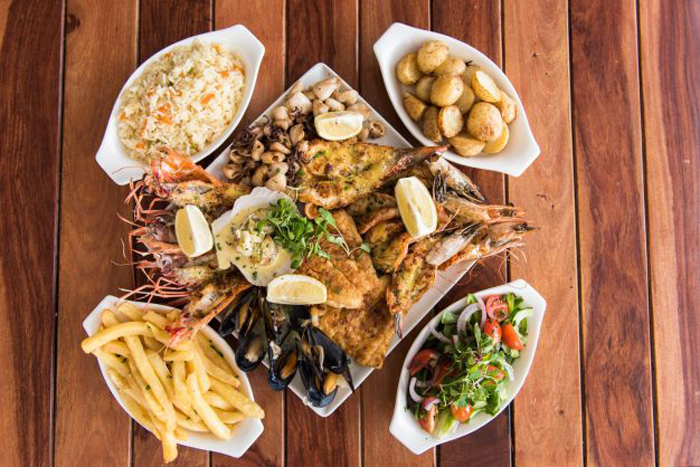 The restaurant has became one of the top culinary destinations for both families and business people alike.

In August 2014, The Codfather, one of Johannesburg’s most prominent seafood establishments, moved from its rustic surroundings in Rivonia Road to a plush, upmarket, high-rise building in Stan Road, Morningside, Sandton.

To celebrate its fifth birthday in this location, the management will be hosting a daily celebration for the entire month of August. On offer are free wine tastings from South Africa’s best wine estates, whisky promotions, daily prizes and festive seafood dishes.

It’s a venue I’ve always enjoyed since first discovering its culinary delights (and excellent service) way back when it operated in the Rivonia rustic village environment.

Though frightfully upmarket now, on the ground floor of the swish Sandton Skye complex, it cleverly retains the recipe that made it a by-word in fine dining experiences.

Adjoining the premises is an outdoor deck and swimming pool.

The Codfather is modern and spacious with open seating, appealingly comfortable chairs and two well stocked bars facing each other.

It boasts an impressive wine cellar in a recess, where an immense range of reds and whites peer at you from behind glass panels, and the famous glass display cabinet housing its fresh bounty from the sea.

The aim is to design a dish to suit your budget, a unique restaurant concept. There is also a separate tank with live crayfish and lobsters.

The restaurant also has an extensive cocktail menu with glamorous names for the spirited offerings, signature and designer sushi and more than 400 premium whiskeys.

However, it’s the quality of the seafood that draws a diner’s attention here with giant prawns, langoustines, live oysters and live crayfish flown in daily.

Meat and poultry have a place on the menu, too, and vegetarians and vegans are not forgotten, with a wide selection of tasty and creative dishes on offer.

The Codfather has plenty of on-site parking too, and security is tight.

Over the years, this restaurant, with its unique perspective on food and wine, has become one of the top culinary destinations for both families and business people alike.

Skeem Saam actress Neo Ramitshana claims she was assaulted by a bouncer at a Pretoria restaurant.

Skeem Saam actress Neo Ramitshana has claimed she was assaulted by a bouncer at a Pretoria restaurant but its owners say CCTV footage of the incident tells a different story.

The police have confirmed that a case of common assault was opened at the Brooklyn police station.

But a spokesperson for the restaurant told TimesLIVE it was willing to hand over video footage to the police to show their bouncer was the one who was attacked.

Ramitshana, who is six months pregnant, posted on her Facebook page about the alleged incident at Altitude Bar in Time Square, Menlyn, on Friday night.

“I’m so disgusted, outraged and hurt! What a way to conclude one’s Women’s Day!,” she said in her post on Saturday.

She said she had been craving “wors & pap” and asked her sister, Malebo, to accompany her to the establishment.

“I also thought it would be an excellent way to celebrate Women’s Day,” said Ramitshana, who is known for her role as Botshelo on the daily SABC 1 soap opera.

Ramitshana told TimesLIVE that when she left the establishment around 10pm, she realised she had forgotten her takeaways at the door and went back to get it.

But she said the bouncer refused to let her in, grabbed her and when a struggle ensued, strangled and slapped her. She said her outfit was ripped open, exposing her.

She said she had opened a case with the Brooklyn police station, which police spokesperson Cpt Mavela Masondo confirmed on Sunday. TimesLIVE has seen a copy of an SMS confirming her case number.

“Clearly, [Women’s Day] means nothing, clearly the holiday means nothing to anyone if you can still lay a hand on a woman on Women’s day,” she said.

When TimesLIVE contacted the establishment, a man who introduced himself as Ethan, the general manager, said there was video footage contradicting Ramitshana’s version.

Skeem Saam’s Makgofe Moagi opens up about cancer scare: I found a lump

“The three of them attacked him [the bouncer] and slapped him in his face and we have got CCTV showing that nothing happened with this lady,” he said. It is not clear who the third person he referred to is.

He then referred TimesLIVE to the company’s media liaison person, Kyle Word, who said: “We are working with the SAPS and are willing to have them give a statement as well as the CCTV footage showing the hostility towards our security.”

The police’s Masondo said it was alleged that a 33-year-old woman had returned to the restaurant after forgetting something.

“She turned back to fetch it but a security guard allegedly refused to give her access and pushed her left shoulder against the sliding door.”

Masondo said no arrests had been made.

A Cape Town restaurant is serving up award-winning pizza. They’ve just been honoured with the highest accolade a pizzeria can achieve – the best in Africa. Courtesy #DStv403

Massimo’s pizzeria has just been honoured with the highest accolade a pizzeria can achieve.

The local gem run by owners Massimo and Tracy Orione has just being ranked the very best pizzeria in Africa by 50 Top Pizza.

Massimo’s prides itself on its traditional pizza-baking technique.

“We use the best ingredients, stone grinded flour unbleached, it is not imported from Italy and made here in South Africa”, said Massimo,

The international accolade is regarded as the equivalent of what a Michelin star would mean to a restaurant.

150 anonymous food experts visit various pizzerias across the world and handpick their favourite.